I’m Angel Maestro Lafuente, born in Barcelona in 1967. I’m graduated in Law from the University of Barcelona, but eventually I
became a policeman, specifically in the police of Catalonia (Spain), called “Mossos d’Esquadra”. I am policeman since 1992 and I
work for the rights and freedoms of citizens.
My interest for dogs, specifically Newfoundland, started in 1997, I had always
been a dog lover but always live in an apartment I could never have one. I got
married and went to live in a ground floor apartment that had a large courtyard
and a garden, my ex-wife did not want dogs at home but in December 1996 in a
television program she watched a reportage from a Newfoundland breeder and

she said that if the dog was like the dog in TV would not mind having one. I

wonderful breed. In three months came home my first Newfoundland, was a
female named “Duna de la Milanera”, she initiated a passion in me.
I have been few years in the board of Spanish Newfoundland Club where I took

over the magazine and the breeding. Currently, I’m the President of Spanish
Newfoundland Club.
I started to breed Newfoundlands in 1999 under the kennel prefix
“Anmalamual” and my wife, Patricia Melara (“Basaburua” kennel prefix), we
currently have 16 Newfoundlands dogs at home and nine more out in coownership and also 5 wire haired miniature dachshund. Among these, highlight

our star known to all as Good As Gold Anmalamual Del Basaburua, called

“Nacho”, one of the most awarded Newfoundland in the history of the breed and
wich we are very proud of all achievements of him but particularly for the Best
of Breed at the American National Specialty 2012 and his two World Winner in
2009 & 2011.
Since we started to breed, back in 1999, we treasure more or less 200
championships, including two BOB at the World Dog Show (2009
and 2011) and multiple Best in Show, Groups and Placements.
I have judged several Fun Matches all breeds in Spain from 2005
until 2011.Since 2012 I am authorized to judge championship points.
Nowadays I am FCI International Judge for BERNESE MOUNTAIN
DOG, BOXER, BULLDOG, BULLMASTIFF, DOBERMANN, 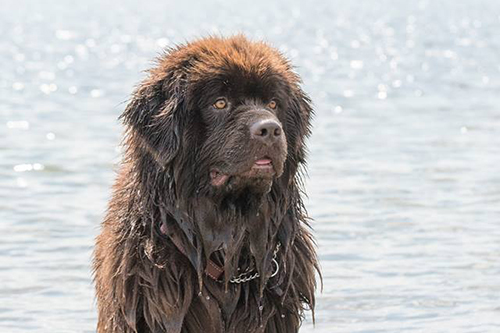